In the SNES game Donkey Kong Country 3: Dixie Kong's Double Trouble, there are a variety of cheat codes. To enter one of the following codes, highlight a file on the file select screen and press L R R L R R L R L R. You will then be able to enter a cheat the same way you would enter your name. Also, all of the cheats except LIVES will have a permanent effect if entered before starting a new game.

ASAVE - Automatically saves your game whenever you beat a level. If you enter this before a new game, you are called a Cheatin' Chump on the results screen at the end of the game.

HARDR - Removes 29 of the games DK barrels and awards you 104% upon completion of the game instead of 103%. Will only work if entered before a new game.

LIVES - Grants you 50 lives. If you enter this before a new game, you are called a Cheatin' Chump on the results screen at the end of the game.

MUSIC - Brings you to a sound test mode

TUFST - If entered before when loading a saved game, all star barrels are replaced with banana bunches. If used before starting a new game, along with the star barrels being gone, all of the DK barrels except four are removed, and completion of the game awards you 105% instead of 103%.

WATER - Allows you to swim into the waterfall in the area left of Bazaar's General Store. There you enter an area similar to a banana bird cave, completion of which gives you all of the bonus coins. 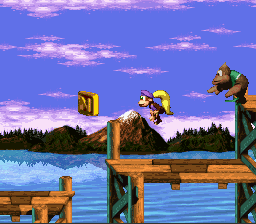 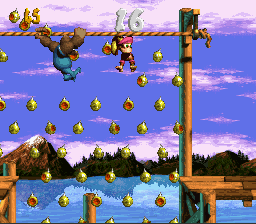 Left: Dixie and Kiddy with swapped palates due to the COLOR cheat.

Right: A bonus room with the stars replaced with ornaments because of the MERRY cheat.