Star Fox is a 3-D first-person space shooter game first released in 1992 for the SNES. The game was revolutionary because it used a special chip in the SNES to produce three dimensional polygons instead of 2-D sprites. Though the graphics do not stand up to today's standards, the gameplay is amazingly fun and you will find yourself playing the game over and over again.

The game takes place in the far away Lylat System where the evil scientist Andross is attempting to conquer the system with his powerful starfleet. With only the planet Corneria left, and even there it is under attack, General Pepper hires mercenary team Star Fox to counter Andross' attack. Equipped with new experimental star ships known as Arwings, Fox McCloud, Peppy Hare, Falco Lombardi, and Slippy Toad attempt to make their way to Andross' base on the planet Venom and defeat him.

When you begin the game, you are first asked to pick one of four control styles. Then, you pick one of three routes to the planet Venom, and set out. Keep in mind that there is no saving or password system, you just continue until you win or get a game over. 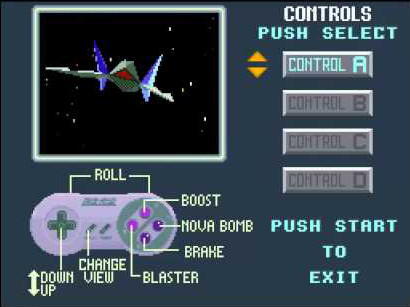 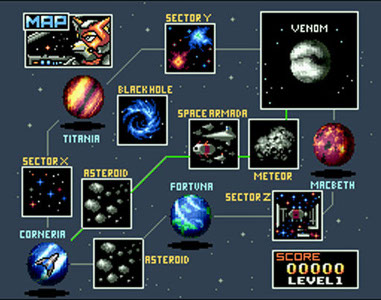 The control select and map screens.

Within each level, you control Fox's Arwing. You move forward automatically, but you can move around the screen, fire lasers and bombs, and temporarily speed up or brake. The goal of each level is simple, survive to the end and defeat the boss before your shield meter runs out. Your teammates will shoot some enemies, and will occasionally call in asking for help or offering advice, but you must do most of the work on your own.

If your shield meter runs out, you lose a life and start from either the beginning, or halfway (if you've made it that far). You start with three lives, and you gain extras for finishing a level and having defeated a certain percentage of enemies. You should also look out for items in the levels. Bombs increase the amount of bombs you have by one, silver rings refill some of your shields meter, and gold rings increase the length of your shield meter and refill some of it. 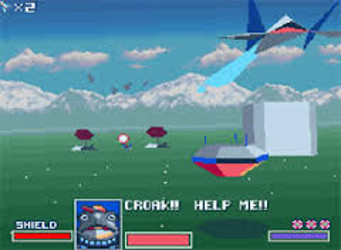 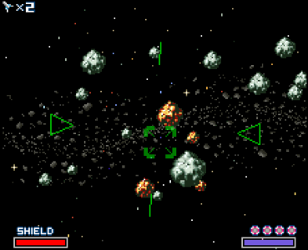 One of the places the game really shines is the level design. On your way to the planet Venom, you'll have to navigate through an asteroid belt, blast through an enemy starfleet, and carefully skim the surface of dangerous planets. The music also complements the feel of every level really well, and you may even find yourself humming it from time to time.

Though the graphics may not be the best, the innovative gameplay makes this a classic. The music is catchy and the levels are full of action. Even if you don't think you like first-person shooters or games set in space, you'll love Star Fox.