As you may know, I love creating a variety of art. In 2014, I created my rather popular Kirby's Adventure Mandala. During 2015, I created many more pieces, including a lot of artwork utilizing sprites from classic video games. Now we're nearly a quarter of the way through 2916, and I realized I never posted any of the artwork I created last year. To make up for that, here are all of the pieces I created last year for you to enjoy. (Warning, I talk quite a bit about my emotions towards the artwork and the process of making the pieces. Skim/skip the text if you just want to admire the artwork, or just don't like reading non-facts.)

It's Dangerous to Go Alone!

This first piece has the distinction of being the first thing I ever made in a photo editor (GIMP). It's rather plain, simply showing the Old Man from The Legend of Zelda with his iconic quote, and all of the game's bosses there to emphasize his point. Still, I'm rather fond of it, probably because it was the first thing of it's kind I ever made.

Following my success with "It's Dangerous to Go Alone!", I decided to make this one. I selected some of the most iconic NES sprites, and arranged them to spell out the Nintendo Entertainment System's famous acronym. Admittedly, some of the sprites I used are a bit unpolished (especially the Eggplant and Metroid enemy), but I still like the design.

Just a simple piece I whipped up in about 1/2 an hour one day. I wanted something new for a desktop background, so I picked out 16 of the most famous NES title screens, and arranged them by date. There are plenty of other great NES title screens I could have put in if I made the piece a bit larger, but for a spur of the moment design, it's not half bad.

The Trials of Yoshi

Out of all of the digital sprite-based artwork I've made, this piece remains my favorite. Featuring every single boss and mid-boss from Yoshi's Island, with Yoshi staring up through his foes at Giant Baby Bowser. I added in multiple backgrounds and platforms along with a variety of common enemies for variety and visual contrast. (It was also ridiculously difficult to get sprites for The Potted Ghost and Sluggy the Unshaven; as their in-game files are merely shaded cylinders that are later transformed with a special program in the code.)

Like "NES Title Screens", this untitled piece was a rather sudden inspiration and quick to make. It features screenshots of Link learning each of the 12 ocarina songs, ordered the way they are in the status screen. This one is rather popular, due to the popularity of Ocarina of Time combined with the nostalgia factor and the fact that it's just plain an awesome game.

Untitled (A Link to the Past)

This one actually started life as a quick pencil sketch showing all of the items in A Link to the Past. However, I discovered that I cannot draw Link at all, so after a few months, I decided to recreate the original idea using the game's sprites. I added in the pendants and crystals so it would truly show all of the games items; and after a lot of experimenting, I finally decided on the Master Sword's pedestal as a fitting background.

Ever since I finished my Kirby's Adventure Mandala, I've wanted to make another one. One day, while eating dinner, I just suddenly realized that a Mega Man game would be perfect for a mandala. I picked Mega Man 2, a fan-favorite for understandable reasons. After a few setbacks, I decided to try something new: drawing it in enlarged sections and then scanning those sections into my computer to color and assemble them. As of right now, I've only drawn Air Man's stage (which you can see the progress of below, I will update it), but hopefully I'll be able to get working more efficiently and finish it before the end of the year. 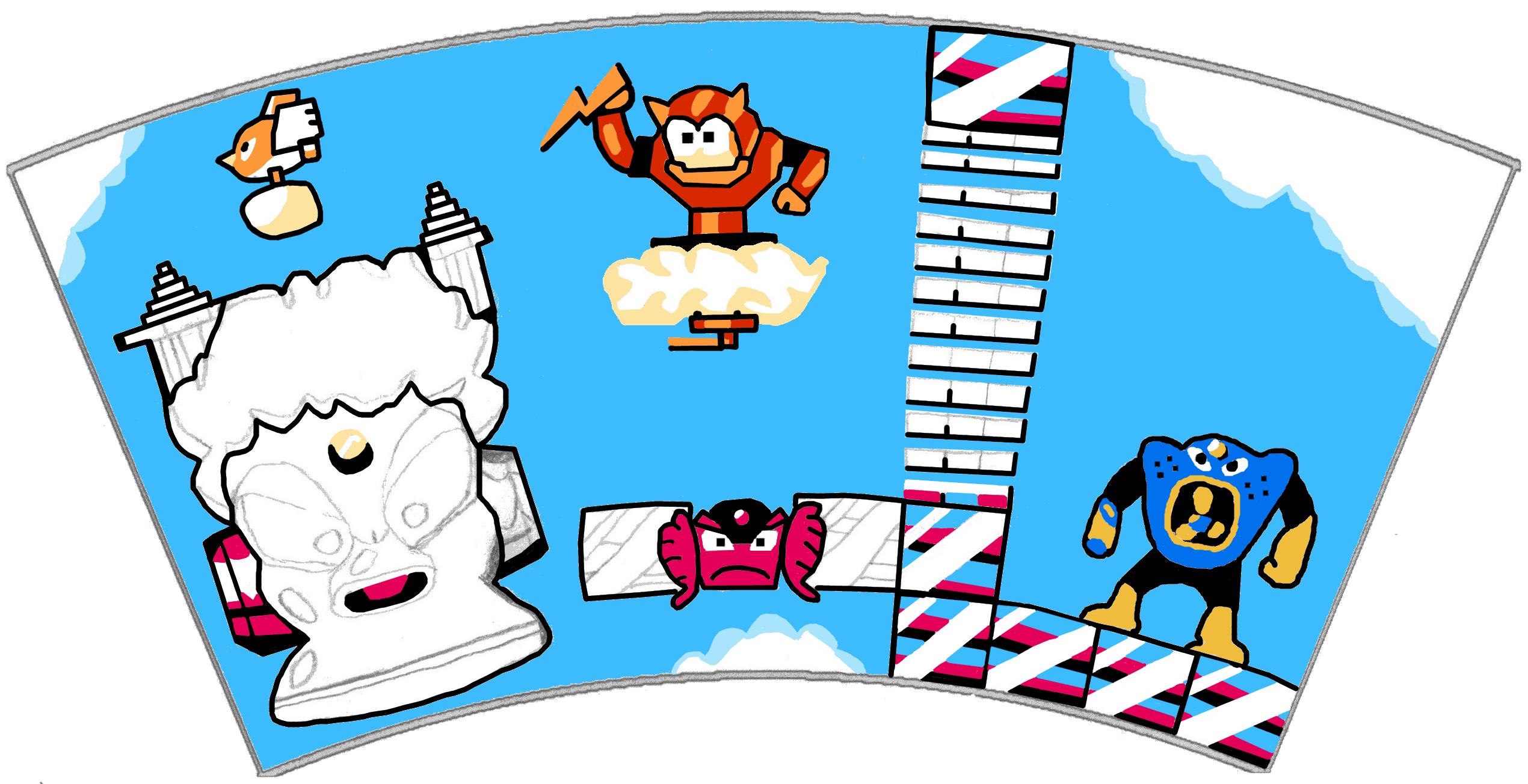 Which piece is your favorite? Be sure to let me know in the comments, via email (xanderfix@gmail.com), or on social media. If you would like to see prints of any of these, don't hesitate to tell me, I'd love to get into the art selling business. (Now, back to work on Air Man...)